Growing certified improved seed of millets and legumes is a profitable business enterprise for farmer cooperatives in Mali. Improved seed summon twice the market rate and the turnover is so high that existing storage facilities can accommodate only a quarter of the production. Increased farmer incomes from seed production and as well as increased yields on farms from using quality seed has benefited the community at large leading to greater food security, reduced migration and increased women entrepreneurship.

The production of cereals is critical for food security in Mali. Cereals account for around 80% of the cultivated area according to a recent study. Among legumes, groundnut and cowpea are important crops grown for home consumption and markets. Availability of quality seed of improved varieties had been a major constraint in the region. To overcome the problem, farmer organizations in Mali are investing in seed production of crops like sorghum, millet, groundnut and cowpea and equipping their members to become certified seed producers. Initiatives like these that started during the HOPE II1 project are continuing through AVISA2.  Continued project interventions and training programs for a substantial period has resulted in significant gains for farmers. 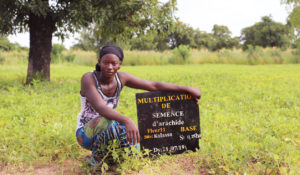 Farmer Daba Kane from Falakan village, Kayes region, is a role model for seed producers in the region, especially for those growing improved varieties of groundnut. He is a member of the Sabunyuma cooperative, a partner of the national groundnut program of Institut d’Economie Rurale (IER), Mali’s agricultural research institute, and has an impressive story to tell.

“I have been through times when the harvest from local varieties was so low that I could no longer feed my family. During the off-season, children in our communities would migrate to towns like Bamako, Segou and Sikasso to look for other source of revenues. Thanks to technical support and the trainings to our cooperative members, I was able to become a seed grower, earning more income and growing more food for my own consumption,” says Mr Kane.

In Segou region, a farmer organization – Union Nieta de Bla, stands out in the production of seed, especially of improved varieties of sorghum and millet. The union comprises of 137 cooperatives and has around 30 seed producers.

As part of the AVISA project, the Union focused on selling mini-packs of improved seeds and conducting demonstrationson plots, “For the 2019 crop season, 1,600 farmers benefited from mini-packs of improved seed and 23 demonstration plots (14-sorghum and 9-millet),”says Mr Gaoussou Coulibaly, president of the Union. Seed production was on an average 21 tons for sorghum hybrid and 2.5 tons for OPV varieties per year.

“Farmers in Bla accept the price difference because the hybrids are more productive. This is why we are training new members to become seed producers especially for hybrids. That way they can produce enough for their own consumption and sell the seed to meet other expenses,” says Mr Coulibaly.

A technician quits his job to grow sorghum and cowpea seed

In the rural commune of Cinzana, Mr Djamory Koné, a member of the Minankofa Seed Group (GSM) which has 55 members, is another successful seed producer. A former technician at IER, he left his job in 1993 to take up sorghum and cowpea seed production. His preferred varieties are Acar 1 for cowpea and CSM 63 for sorghum.­­­­­­

At Siby village, 50 km from Bamako, the farmers’ organization Cooperative des Producteurs de Semences Maraicheres du Mali (COPROSEM) has 87 seed producers, 20 of them are women. For the 2018-2019 crop season, 25 producers, including 7 women, produced groundnut, sorghum, millet and cowpea seed, explains Mr Coulibaly, President of COPROSEM. Among the women producers Ms Massaran Camara, started producing groundnut seed (Fleur 11) on 0.25 ha in 2019. She sold the harvested 200 kg of seed and for the first time contributed to household expenses. “I bought clothes for my child and gave my husband some money,” says the young seed producer.

Across Mali, farmers’ cooperatives are investing more in seed production and there is a rise in the availability of certified seed. Vast quantities of seed can be made available in neighboring and faraway farmers, however shortage of storage facilities are a challenge.

With increased seed production, enhancing storage facilities is a priority. “In the community where COPROSEM works, the numbers of registered seeds producers is increasing. We have difficulties in storing our annual production of around 40 tons for all crops. The available storage house has a maximum capacity of only 10 tons,”says Mr Coulibaly. A clear sign that the seed production has exceeded the expectations of the community members.

For more on our work in Mali see:

2Accelerated Varietal Improvement and Seed Delivery of Legumes and Cereals in Africa
This work contributes to UN Sustainable Development Goal.