A study in Northern Ghana revealed that lack of access to finance often hinders productivity in women-run farms. To correct this, several Village Savings and Loans Associations (VSLAs) have been formed in the region, wherein community members contribute on a weekly/monthly basis to raise funds. Needy members can use these funds for groundnut seed production and other on-farm activities.

Gender-based agricultural productivity gap has received increased attention in the last decade. Researchers from The Council for Scientific and Industrial Research of the Savannah Agricultural Research Institute (CSIR-SARI) discovered in a study, under Objective 1 of the Tropical Legume phase III (TL III) in Northern Ghana, that the lack of financial power to women was one of the key reasons for a difference in productivity between farms managed by women and those run by men.

Most smallholder women farmers in Africa have limited or no access to land, labor, inputs or credit. Financial institutions often charge high interest rates and require collateral for credit. Women are unable to provide collateral because they may not have legal ownership of the assets.

To address this, TL III partnered with SEND-Ghana (Social Enterprise Development), a non-governmental organization to put in place VSLAs in five districts of Ghana. The VSLAs act as self-help platforms to help groups raise funds at the community level without having to resort to external lenders. 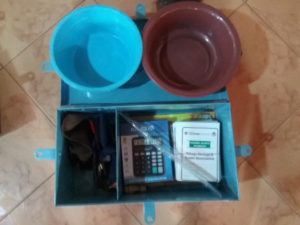 The concept for VSLA – to provide women with access to credit, seeds, and fertile land – was developed from a gender workshop organized by the TL III project. VSLAs help women become financially independent and also strengthen the groundnut seed production system at the community level. Mr Desmond S Adogoba, Gender and Social Scientist, SARI/TL III says, “We are not only empowering women, we are strengthening them and engaging them into the seed systems.”

Mrs Patience Ayamba, Program Coordinator for SEND-Ghana, credits VSLA with creating awareness. “We have seen women participating more in decision making at the family level and even at the community level, with increasingly more women taking up leadership roles,” she says. “With this model, we have seen men willing to support their wives in the household.”

In an intensive day-long training, community volunteers were taught the concepts of VSLA by Mr Samuel Wangul, a SEND-Ghana facilitator, in Tamale, Ghana. Participants were trained on the drafting of the VSLA constitution, recordkeeping of savings passbooks, issuing loans to group members, calculating interest rates, and recovering loans. A VSLA kit was provided to each of them to start the savings process in their respective communities. The participants would then train other members of the group. 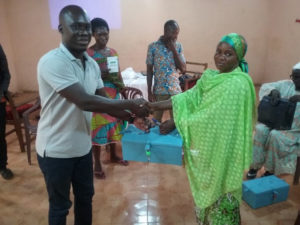 The Gbimsi ‘Tilanngum’ VSLA, located in the West Mamprusi district of Northern Region, has 30 members, all of them women. As in other communities where VSLAs are created, here too chiefs and land owners in the community were sensitized on the need to release fertile arable lands to female farmers. “This has given us hope that women will have better access to arable land for cultivation of groundnut and other crops.” says Mr Sardi Linus Handua, Secretary of the VSLA, the only male member of the group.

Mrs Dachia Midana, who wants to utilize the savings through VSLA to cultivate 60 acres of groundnut in the 2018 cropping season, says, “I joined the ‘Tilanngum’ VSLA so that I can save money and get credit for income-generating activities that will enable me to pay the school fees of my four children, who are all in high school. Moreover, I can get money to prefinance my children’s school fees.”