Niger recently celebrated the second annual International Millet Festival (FESTIMIL), aimed at enhancing the production, processing and consumption of millets, so as to create wellbeing and better dietary diversity. The festival is led by the First Lady, Dr Lalla Malika Issofou, a Smart Food  Ambassador, and offered a framework for discussions around strengthening value chains of millets in Niger. Smart Food Master Classes were also organized for the Presidency and hotel chefs as well as students.

FESTIMIL 2020 consisted of meetings, demonstrations, culinary workshops, contests and panel discussions led by eminent researchers and millet value chain professionals from Niger and other Sahelian countries. Inaugurating the event, HE Mr Albadé Abouba, Minister of State, Ministry of Agriculture and Livestock, said, “FESTIMIL aims to promote healthy and balanced nutrition for families, especially in rural areas, in order to better fight against malnutrition. It is about promoting rainfed and irrigated production of millets, various processed millet-based products, and the nutritional values of millet. Let us consume what our farmers are producing; let us consume Nigerien products.”

FESTIMIL has been adopted and institutionalized by the government of Niger, as an extension of its ‘Nigeriens Nourish Nigeriens’ 3N campaign to promote local products. Dr Issoufou, who is also President of the Tattali Iyali (‘Family wellbeing’ in the local language) Foundation, said, “FESTIMIL has helped us discover that consumption of millets that are rich in iron and zinc can contribute a lot towards improving the nutritional state of target populations and help them fulfill their physical and cognitive potential. Through FESTIMIL, many Nigeriens have understood that millet is a Smart Food. It is tolerant to the harsh climatic conditions of our Sahelian countries and it benefits both producers and consumers as it is a very nourishing food that is good for health.” 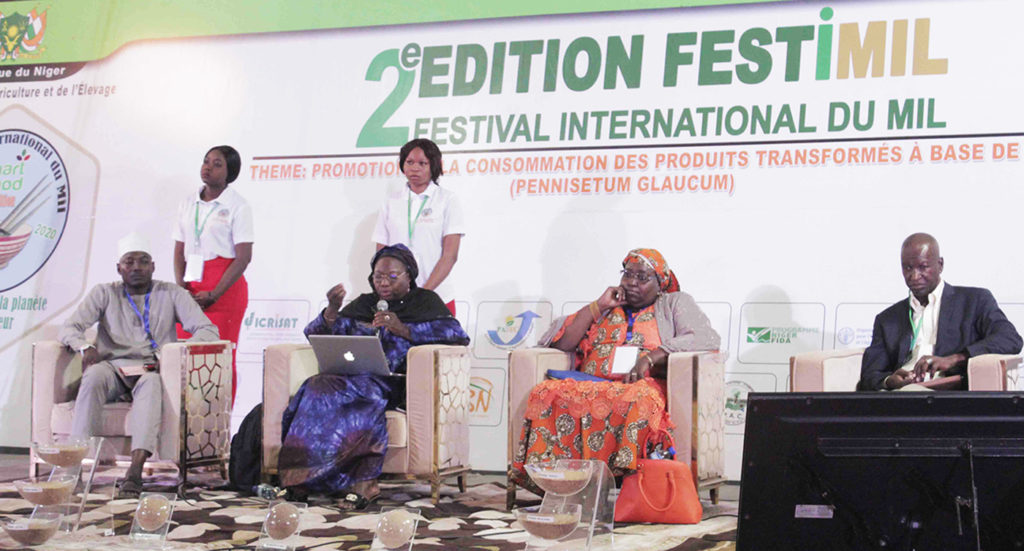 The first panel discussion saw millet breeders and other researchers sharing their insights on the evolution and adaptation of millets in the Sahel.

The second panel discussion was around processing of millets and market opportunities. 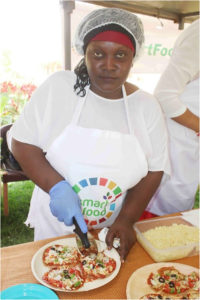 Another Smart Food Master Class for about 25 chefs from the Presidency in Niger and Niamey hotels, during which they were introduced to the Smart Food concept and recipes based on millet and sorghum, was held on 7 March. “I am impatient to go back to my hotel to start using millet in the menu,” said Mr Agbakla Kodjo Anani, Chef, Noom Hotel, Niamey, Niger. “The things that I learned during this training are very simple but good and easy to practice. I especially liked the millet ice cream. A very simple way to start diversifying our diet and a modern way of cooking millet,” said Mrs Akilou Haoua, caterer.

FESTIMIL was held during 3-4 March 2020 at the Academy of Martial Arts in Niamey, Niger. This year the FESTIMIL was organized by the Ministry of Agriculture and Livestock, in partnership with the Tattali Iyali Foundation of the First Lady Dr Lalla Malika Issoufou; the Ministry of Cultural Renaissance, the Ministry of Health, the High Commission for the 3N Initiative, Institut National de la Recherche Agronomique du Niger(INRAN) and ICRISAT.

We thank the CGIAR Research Program Grain Legumes and Dryland Cereals for their support in this event.