Genomics and breeding innovations in agriculture

Our scientists should work on short-duration, multiple stress-tolerant, nutritionally rich crop varieties that are suitable for mechanical harvesting,” Mr Narendra Modi, Hon’ble Prime Minister of India, had once suggested to Dr T Mohapatra, DG ICAR & Secretary DARE, Government of India. Dr Rajeev K Varshney, in a recent ICAR Lecture Series, covered the technological advances in agricultural science, especially in the area of crop improvement, which has played a significant role in the success of Indian agriculture.

While presenting the success stories from Indian agriculture since independence, Dr Varshney presented the comparative progress of how the country has excelled in terms of food production i.e. today India harvests about 100 million tons wheat and is one of the lead exporters in the world; however, in 1965 this was only 12 million tons. In terms of per capita net availability of food grains, it has increased from 312 grams/day in 1950 to 512 grams/day today, in spite of the increase in population. Similarly, the rate of malnutrition and poverty in India has declined from approximately 90% at the time of India’s independence, to less than 40% today.

He highlighted release of several high-yielding, stress-tolerant and disease-resistant varieties together with national partners, including those developed through genomics-assisted breeding in several crops including rice, maize, wheat, chickpea and groundnut. To name a few, drought-tolerant Pusa Chickpea 10216 (BGM 10216), fusarium wilt -resistant Super Annigeri 1 (MABC-WR-SA-1) and Pusa Chickpea Manav (BGM 20211) with enhanced fusarium wilt resistance are success stories of genomics-assisted breeding in chickpea. In the case of groundnut, Girnar 4 and Girnar 5, the first set of high-oleic groundnut varieties were released in India with joint efforts of ICRISAT and the Directorate of Groundnut Research, while foliar disease-resistant lines were developed with UAS-Dharwad. “All this has been possible with the advent of scientific advancements, the prerequisite for such achievements,” said Dr Varshney.

In fact, Indian agriculture has been a bright spot even during the pandemic due to the resilience and hard work of our farmers. However, going forward there is a need for accelerated effort towards building capacities and empowering our national programs to meet the food and nutritional needs of the growing population. As per NITI Aayog’s report, to meet the estimated demand by 2033, production of major crops will need to be significantly increased, i.e. 35.23 million tons for pulses, 337.01 million tons for food grains, 301.78 million tons for cereals, and 99.59 million tons for oilseeds, from the current production of 25.28, 305.44, 279.87 and 36.57 million tons respectively. “To achieve this, adoption of advanced genomic technologies like Genomics-assisted breeding 2.0 (GAB 2.0), will be key, along with conducive policies and enhanced spending on R&D,” emphasized Dr Varshney in his talk. 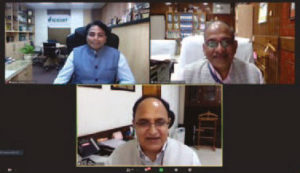 GAB 2.0, a suite of new approaches like haplotype-based breeding, genomic selection and gene editing along with speed breeding, are expected to accelerate varietal development process further and to fast-track our efforts towards crop improvement programs for designing future-ready crops. In addition, Dr Varshney sensitized the participants on the potential role of new approaches, like single cell sequencing, systems biology and synthetic biology that will be future of crop improvement efforts.

Quoting Dr Mohapatra on India’s remarkable progress in enhancing pulses production, Dr TR Sharma said, “After the Green Revolution, if any revolution has happened, it is pulses revolution, where we saw an increase of more than 7-8 million tons in production within 3-4 years’ time. The credit for this achievement of making India self-sustainable in pulses production goes to the enabling environment, technological interventions, policy support, and the hard work of our scientists and the farming community, along with several other factors.”

“Currently, many crop varieties are available in the public domain including more than 71 biofortified varieties, and around 55 varieties across eight crops, developed through marker-assisted selection, which underlines the importance of genome sequencing and genome-editing technologies,” said Dr Sharma. However, we need to apply these in other crops as well and diversify our crop breeding practices. In addition, “Capacity building of our next-generation scientists will be another critical area to adopt and utilize such technologies in our national crop breeding programs,” he added in his concluding remarks.

Dr RC Agrawal, Deputy Director General-Education, ICAR, and the coordinator of this 75-lecture series, appreciated the thought-provoking lecture and for highlighting the key areas that need urgent attention for advancing crop productivity and yield towards achieving the goal of food and nutrition security for all.

This was the 14th lecture in the ICAR’s Lecture Series of ICAR’s ‘Bharat Ka Amrut Mahotsav’ – a massive outreach campaign titled ’75 lecture series’ taken up by the ICAR, the apex body for coordinating, guiding, and managing research and education in agriculture including horticulture, fisheries and animal sciences in the entire country. These 75 lectures will be delivered by experts in various domains related to agriculture and by eminent scientists, journalists, spiritual leaders, motivational speakers and successful entrepreneurs. So far, eminent personalities like Mr Pratap Chandra Sarangi, Union Minister of State, Animal Husbandry, Dairying and Fisheries & Micro, Small & Medium Enterprises; Gurudev Sri Sri Ravi Shankar; Dr Steve Goss, Independent Consultant for the World Bank and FAO;
Dr Anil Prakash Joshi, Environmentalist, some DDGs from ICAR institutes, Director of IITs and others have delivered lecture in this series.