Talbehat (Lalitpur): Water is the basis of life. It is difficult to think of life without water. This is particularly true in the Poora Birdha village of Talbehat block at Lalitpur district, Uttar Pradesh, India. About 3-4 years ago, with very low freshwater availability, farming was almost impossible and the community was struggling. The situation was worse in the Nakti Devi cluster of the Poora Birdha village. Most of the land area in this cluster was possessed by tribal families as the state government allocated common available land to the marginalized, isolated and deprived populations under the social welfare scheme long ago. The overarching aim of this scheme was to improve the livelihood status of vulnerable families through farming; however, this did not happen. Due to insufficient rainfall, this cluster suffered water scarcity over the years, which was largely due to its position at uppermost part of the landscape with degraded land status. Water availability in dug wells was poor and water bodies such as ponds and puddles were defunct. Farming remained a daydream for the tribal families. Ironically, despite accruing landholding status, 40-50 of such families are neither categorized into a tribal group nor a farming community. Under such circumstances, they were compelled to migrate elsewhere to earn their living through daily wage labor, and the Nakti Devi cluster turned desolate.

Although life was unbearable under such a bleak scenario, Sarman and his wife Khumano did not give up and decided to stay back in the village. They were determined to cultivate minimum land area (half a beegha) to achieve food security for their family with profound courage and hard work. They were engaged in various farming operations such as ploughing, sowing and even irrigation to nurture their crops manually. Water, which was most difficult to acquire, was fetched from distant wells in pots to irrigate the plants. They spent most of the day, from morning to evening, fetching water to fulfil the irrigation needs of the half-beegha land. 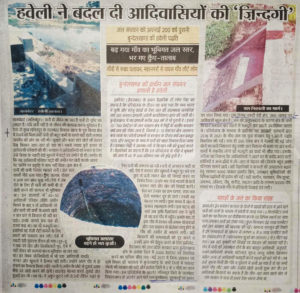 In 2017, under the KISAN MITrA Doubling Farmer Income initiative, ICRISAT, in consultation with the local district administration, identified 5000 ha landscape (2-3 villages) in each of the Bundelkhand districts of Uttar Pradesh for developing the sites of learning. Poora Birdha, Poora Kala and Jhavar were identified as pilot villages in Talbehat block of Lalitpur district. Project activities started rolling in 2018 and the condition of Poora Birdha (particularly Nakti Devi cluster) was monitored by an ICRISAT-led consortium. Scientists were astonished to see the hardships and the distressed predicament of the tribal families and developed a comprehensive plan to rejuvenate the landscape. A number of natural resource management interventions, particularly rainwater harvesting, productivity enhancement, agroforestry and fodder activities along with convergence of different government schemes were started, which created system-level impacts.

Poora Birdha village and particularly the Nakti Devi cluster is located in the uppermost part of the village and characterized with undulated topography and a high land slope. Under KISAN MITrA initiative, five haveli structures were constructed, besides field bunding in 500 acres. In addition, a series of drainage structures were also built along with field bunds to dispose of the excess runoff, so as to prevent breaching of the field bunds during heavy downpours. While undertaking construction activities, youths and village members were involved as laborers. With dedicated efforts and swift execution, high-quality masonry structures were constructed. Moreover, participatory field demonstrations were held for over 3,500 farmers and a range of agroforestry models were established by planting about 30,000 tree saplings of teak, melia dubia, lemon, guava, moringa, etc. in the DFI project villages between 2018 and 2021.

Dr Ramesh Singh, Principal Scientist, ICRISAT, shared that the haveli system of rainwater harvesting was one of the age-old practices in central India and were the lifelines of the region, supporting the need for freshwater for agriculture and domestic sector. This method, practiced over the past 200 years in the region, involves draining of water from 10-100-ha catchment area and its harvesting in downstream field by constructing earthen embankments across the slope; about 2-10 ha land is allowed to be submerged during monsoon. The harvested water is drained out by mid-October and farmers are able to cultivate their land using residual soil moisture. We have hard evidence that KISAN MITrA project has helped to enhance farmers’ income by 40-300% across the project villages of seven districts compared to baseline status.

Runoff generated from hillocks was diverted into haveli system

In Poora Birdha village of Lalitpur district, runoff generated from hillocks was guided through field drainage channels to the haveli system. A 3-kilometer long diversion drain was excavated and the drainage network was widened. In addition, this channel was also treated by constructing masonry plugs (also called nala plugs in parlance) at suitable intervals to harvest additional freshwater besides facilitating draining of the runoff to the downstream area. Altogether, 1.5 lakhs cubic meter storage capacity was created in Poora Birdha village which is harvesting about 6 to 8 lakhs cubic meter freshwater per year. As a result, the water levels in wells have increased by 2-5 m compared to baseline. This cluster has now transformed into a prosperous landscape with adequate water availability. With realization of improved surface and groundwater availability, several tribal farmers (e.g., Bahadur, Ajuddi, Kamla, Chottelal, Suraj, Lallu, Rakesh, Khaliwan, etc.) who had migrated to nearby cities have come back home in recent years. They realized that adequate water is now available at their doorstep and they have proudly started cultivating two crops in a year.

This story was first published by Dainik Jagran