Globally, agriculture is witnessing significant technological advancement, best exemplified by the Agriculture 4.0 movement. India, one of the world’s largest food producers and consumers, has to stay abreast of the growth.

Remote-sensing imaging for monitoring crop health and security is one of the technologies yet to come of age in India.

Evolving regulations and lack of expertise are teething troubles set to pave way for Unmanned Aerial Vehicles (UAVs) with Red Green Blue (RGB) and multispectral/hyperspectral cameras for accelerated data collection. Imaging with UAV is being done elsewhere in the world to support crop improvement and precision agriculture. Drones are also being used for accurate and targeted pesticide spraying, thus minimizing human exposure.

To give drones a leg up in India, the Indian Institute of Technology-Hyderabad and ICRISAT are collaborating to standardize phenotyping protocols using UAV-based technologies to support crop improvement programs. 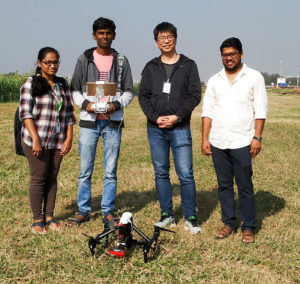 Members of the team collaborating in designing the SOP for using drones in crop phenotyping.

Establishing ground rules before flying drones over fields can help efficient image capture and analysis. Make of the drone, location, wind speed, flight height, image capture frequency and solar radiation are critical parameters that determine outcome i.e. the quality of data that images can provide. While making fixed prescriptions for each of these parameters would be counterproductive, understanding a range of operating conditions within which optimum image capture results can greatly augment phenotyping efforts.

Dr Vincent Vadez, Principal Scientist, IRD, France, who is the Project Collaborator (ICRISAT) and Module 4 Leader of (EiB), said, “EiB is currently developing an initiative addressing the main bottlenecks. These are- (i) the need for SOP to generate quality images and (ii) access to automated, high quality and high performance data analysis pipeline to generate trustworthy crop indices with a fast turnover time to support breeding selections. These two limitations were recognized after a workshop with some of the most advanced global groups in the domain of drone technology development that support breeding,”.

During nearly 70 flights over the past one year at ICRISAT, the team captured RGB and multispectral images using cameras aboard a DGI drone (four-rotor) weighing about 2 kg with payload. The crop traits targeted include plant count, plant height, flowering time and leaf area index. The images captured from drones are tested for multiple image quality indicators and subsequently stitched with software before they are used for analysis.

To date, we found that flying the drone at a height of 7 m to 25 m and at speeds ranging from 3 to 5 km per hour when wind speeds are under 10 meters per second, appears optimal to attain hihg quality images. Furthermore, the image overlap, the percentage of every frame captured that needs to be in another frame, is an important parameter to assess. For any given shutter speed, the team found that atleast 80% overlap is desirable. Higher overlaps would result in higher quality of images stitching (i.e. orthomosaic) but would also mean slower drone movement, increased power consumption and time taken. On the other hand, lower overlap could risk information loss. The team is now conducting more detailed analysis to develop the SOP based on this large dataset.

Attempts to develop an effective image analysis pipeline is heavily reliant on capacity to predict the ground truth observations. In many cases, collection of quality and sufficient ground-truth data might pose another constraint. In our case, we collected ground truth data on a massive scale from the LeasyScan high-throughput phenotyping platform and precision fields of ICRISAT.

Explaining the larger effort underway, Dr Jana Kholova, Senior Scientist, Crops Physiology and Modelling, who is the nodal contact for ICRISAT’s work in drones under two projects, said that ICRISAT’s GEMS (Genotype by Environment by Management by Society) is working on developing a publicly available phenotyping platform, which could drive the use of drones for crop traits evaluation. 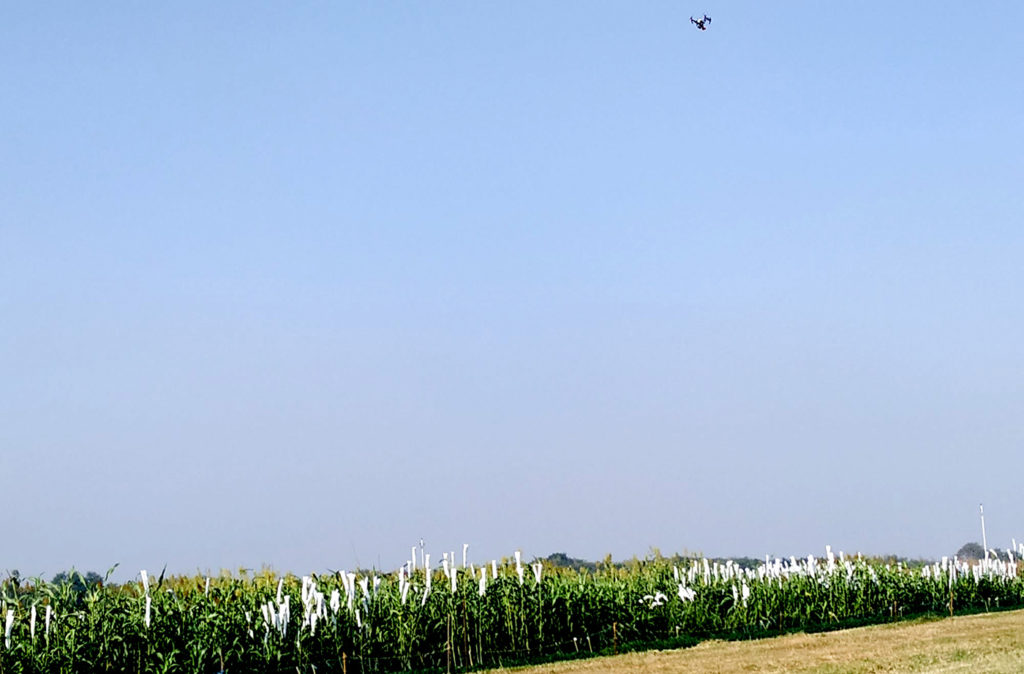 “The GEMS team, along with local and international experts, is developing a publicly available platform to provide quality phenotyping services under an internationally unified and standardized set of protocols, which can enable rigorous comparison of results across partner networks. Once the platform is rigorously tested and fully established, we foresee UAV-technology enabling the transparent and cross-comparable phenotyping for environmental adaptation to accelerate crop improvement in complex SAT agri-systems.”

The two projects which the team is involved in are ‘Sorghum Genomics Toolbox: TERRA Partnership’ funded by Donald Danforth Plant Science Center Institute for International Crop Improvement and ‘AI Driven High Throughput Phenotyping to Accelerate Crop Improvement through Crop-images Captured from Unmanned Aerial Vehicle (UAV) with On-Vehicle Sensors’ which is funded by Government of India’s Ministry of Electronics and Information Technology.

Priyanka Gattu is a Junior Research Fellow with ICRISAT and IIT-Hyderabad.

Sunita Choudhary is a Scientist at ICRISAT