More than 80,000 farmers, seed and grain producers, agro dealers and processors in Mali were reached through radio and TV messaging during 2020. This complemented 145 demonstrations of new varieties of sorghum, pearl millet, groundnut and cowpea for 3,300 producers. Even during times of a pandemic, assistance to farmers must continue, as was aptly shown in the first year of the UE-APSAN-Mali project. Modernization of breeding programs using RapidGen and capacity building of young scientists were other important components of the work.

ICRISAT’s breeding programs are being modernized to rapidly develop climate-smart crop varieties aligned with market demand. This has enabled breeding programs of the National Agronomic Research Institute (IER) in Mali to start off-season production and, using RapidGen (Rapid Generation Advancement) through irrigation facilities, to carry out two generations of breeding material per year instead of one. Last year, varietal trials for the four crops were set up by ICRISAT and IER.

These major results of the first year of implementation of the EU-APSAN-Mali project, implemented by ICRISAT, were announced by Dr Ramadjita Tabo, Regional and Research Program Director, West and Central Africa (WCA), ICRISAT, during the project’s Annual Review and Planning Meeting held at ICRISAT research station in Samanko and at the headquarters of the IER. The main objective of the meeting was to discuss the results obtained during the first year and to take stock of the lessons learned in order to better plan the second year.

Thanking the European Union and project participants for the results obtained in record time, Dr Tabo said, “This project, which aims to improve the food and nutritional security of 10,000 direct beneficiaries, and also indirectly reach 30,000 producers of sorghum, millet, groundnut and cowpea in Mali, recorded encouraging results despite the constraint of the COVID-19 health crisis.”

Mr Olivier Lefay, Program Manager, Food Security, of the Delegation of the European Union in Mali, also appreciated the efforts made to increase productivity and lift populations out of poverty and malnutrition. He said he was encouraged by the transfer of technology and skills and by the linkage of the various stakeholders as part of a continuous learning process. He emphasized the important role of the Smart Food initiative in the implementation of the project in Mali. In the immediate future, the project plans to test acceptability of smart foods through studies, considering varieties evaluated and accepted by populations.

Dr Modibo Sylla, representative of the Director General of IER, and Dr Mohamed Dicko, Scientific Coordinator for irrigated crops at IER, representing the focal point of the EU-APSAN-Mali project at IER, welcomed the project’s contribution to increasing productivity of sorghum, millet, groundnut and cowpea value chains in the target regions. They also thanked the European Union delegation for its support for agricultural development in Mali.

Dr Baloua Nebie, Project Coordinator from ICRISAT, outlined the project objectives, impact pathways, interventions zones and targets of the project and the keys results achieved. He mentioned that of the 38 activities proposed in the project document, 27 effectively started in Year 1 with good progress, and therefore concluded to an implementation rate of 76%.  “Failure to carry out and the delay in starting some activities is mainly due to restrictions related to COVID-19, but the success rate is strong,” explained Dr Nebie as he described a participatory rural assessment of sorghum varieties that was carried out in synergy with the AVISA project, as well as regional trials implemented across eight countries (Mali, Niger, Burkina Faso, Chad, Senegal, Togo, Ghana and Nigeria) and 54 varieties shared to partners across WCA.

Another important achievement of the project is that nine doctoral students (four at ICRISAT, four at IER and one PhD student hosted from WASCAL program) and three Master’s students have been supported by the project for their end-of-studies internship at ICRISAT.

Dr Dicko also highlighted the strength of the project in terms of capacity building: Six interns (Master’s students) and one doctoral student under each research program and 43 other Master’s interns were supported.

On the occasion, the doctoral students recruited at ICRISAT and IER gave each presentation of their research theme and protocol. “We’ve conducted preliminary trials, participatory trials and demonstrations, and distributed mini sachets of seeds of the promoted varieties,” added Dr Dicko. “Activities to modernize breeding programs have contributed to the strengthening of the irrigation system of the four crops and the renovation of greenhouses and drying areas for sorghum and groundnuts within the IER. In addition, regional trials have been conducted with 20 varieties of millet; 28 varieties (16 dual purpose) of sorghum; 18 varieties of groundnut; and 22 varieties of cowpea.”

Other highlights of the meeting included a discussion about participatory varietal selection in the process of genetic improvement of crops, data management tools and innovation platforms. According to a testimony reported by Ms Aminata Tangara, Director of the NGO MALIMARK (Mali Agricultural Market Development Trust) and team, “The project innovation platforms have made it possible to train more producers in hybrid seed production techniques; to distribute mini bags to producers and thus improve access to new varieties of cowpea, sorghum, millet and groundnut.” 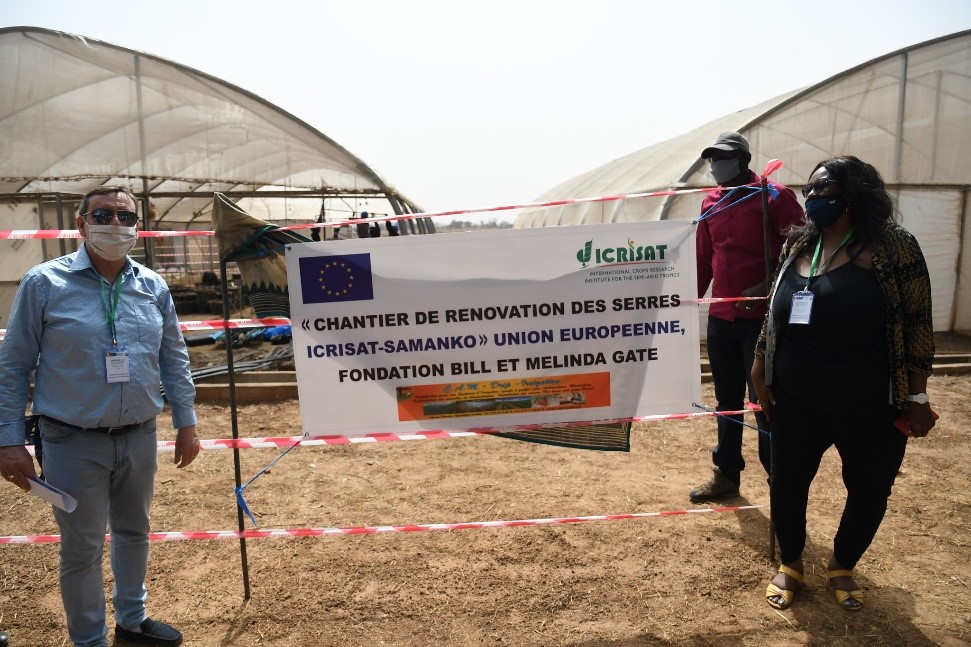 The review and planning workshop of the EU-APSAN-Mali project took place in two phases. The first phase (1-2 March 2021) focused on research aspects. The second phase (4 March) was a day workshop focused on the results achieved during the first year of the project implementation.

The meeting included three different working group workshops: (1) thematic discussion on breeding program modernization, socio-economic backstopping and smart food, (2) planning of Research activities in Year 2, (3) planning of dissemination and extension activities in year 2. Two side events were organized during the meeting at the Samanko: a visit of greenhouse renovation that is undertaken under the support of the European Union and the Bill & Melinda Gates Foundation on 1 March and a visit of the off-season sorghum seeds production on 4 March.

Participants gave their feedback on the exchange and farmer visits organized by the project around the sorghum, cowpea, millet and groundnut trials and demonstration plots. All partners (each in its capacity) were invited to present few success stories that marked year 1 of the project implementation. Many expressed their gratitude for the training of farmers on hybrid seed production techniques; the distribution of mini bags to producers and the availability of new varieties of cowpea, sorghum, millet and groundnut; demonstrations carried out 100% in certain areas, strengthened relations between researchers, producers and extension workers; excellent production of the Sorghum Soubatimi variety in some areas, with more than 3 tons per hectare; the installation of innovation platforms; the organization of farmer field days and the connection of participants through social networks and in particular the creation of a WhatsApp group.

The review and planning meeting of the UE-APSAN-Mali was co-organized by ICRISAT and IER.

For more on our work in Mali, please click here: Mali| EXPLOREit@ICRISAT