The results of the first ever large-scale survey on millet consumption in India has been published, offering government, central and states and the private sector valuable insights into consumer trends to help further mainstream these nutricereals.

The results of the 15,500 face-to face survey, coordinated by the International Crops Research Institute for the Semi-Arid Tropics (ICRISAT), and reported in Frontiers in Sustainable Food Systems, showed that improving health and wellness, weight loss and taste were the top reasons for those consuming millets in urban areas.

The survey undertaken in seven cities, Ahmedabad, Bengaluru, Chennai, Delhi, Hyderabad, Kolkata and Mumbai, was conducted in 2017 and data recently analysed in detail form an important baseline to track the changing consumer views about millets as more efforts are being made to promote millets.

Ms. Joanna Kane-Potaka, the study’s first author and Assistant Director General (External Relations) and Executive Director of the Smart Food initiative at ICRISAT said that health awareness alone would not be enough to influence the population to consume millets.

“The report emphasized these insights to show the need for tasty products and simple recipes made from millets as well as the need for changing the image of millets,” said Ms. Kane–Potaka.

In observing the study, Dr Suresh K Malhotra, Commissioner of Agriculture, Government of India said “the data provides good insights and is a baseline that will be useful across India and the world when we prepare for exciting initiatives in the run-up to the International Year of Millets in 2023”.

Prof. Prabhu Pingali, Chair, ICRISAT Governing Board added that the survey was an example of the Institute working closely with Government to provide scientific agricultural and related information to inform good public policy.

“Government can play a critical role in creating the enabling environment for more diversified and healthier diets, like millets, and to make them more accessible and affordable for all sections of society.

“Understanding consumers and their desires and perceptions is critical in designing these policies,” said Prof. Pingali.

In concluding, Dr. Jacqueline Hughes, Director General, ICRISAT said it is imperative for millet promoting initiatives to reach the whole population as these crops offer a multitude of benefits.

“IIMR has been widely promoting the health benefits of millets and developing nutritious products. This survey further emphasizes consumer interest and the need to keep reaching out to spread the good news about millets and exciting new ways to eat them,” Dr Vilas A Tonapi, Director, ICAR-Indian Institute of Millets Research, said about the survey.

“The data indicates that the early adopters of millets are consumers with a health problem and so they search for solutions. Second are the people who are health conscious and interested in healthy lifestyles. However, to make a big impact it will be important to reach the masses across markets,” commented Dr S Anitha, one of the study authors and Senior Scientist-Nutrition at ICRISAT.

“As this survey was undertaken in urban shopping centers, future studies should obtain similar consumer data in rural and peri-urban areas to compare various consumer segments and to develop better understanding of millet utilization. Moreover, repeated studies should be conducted to track these changes over time and their influences on changing consumer behavior,” said Dr S Nedumaran, Senior Scientist-Economist, ICRISAT, and a co-author of the study. 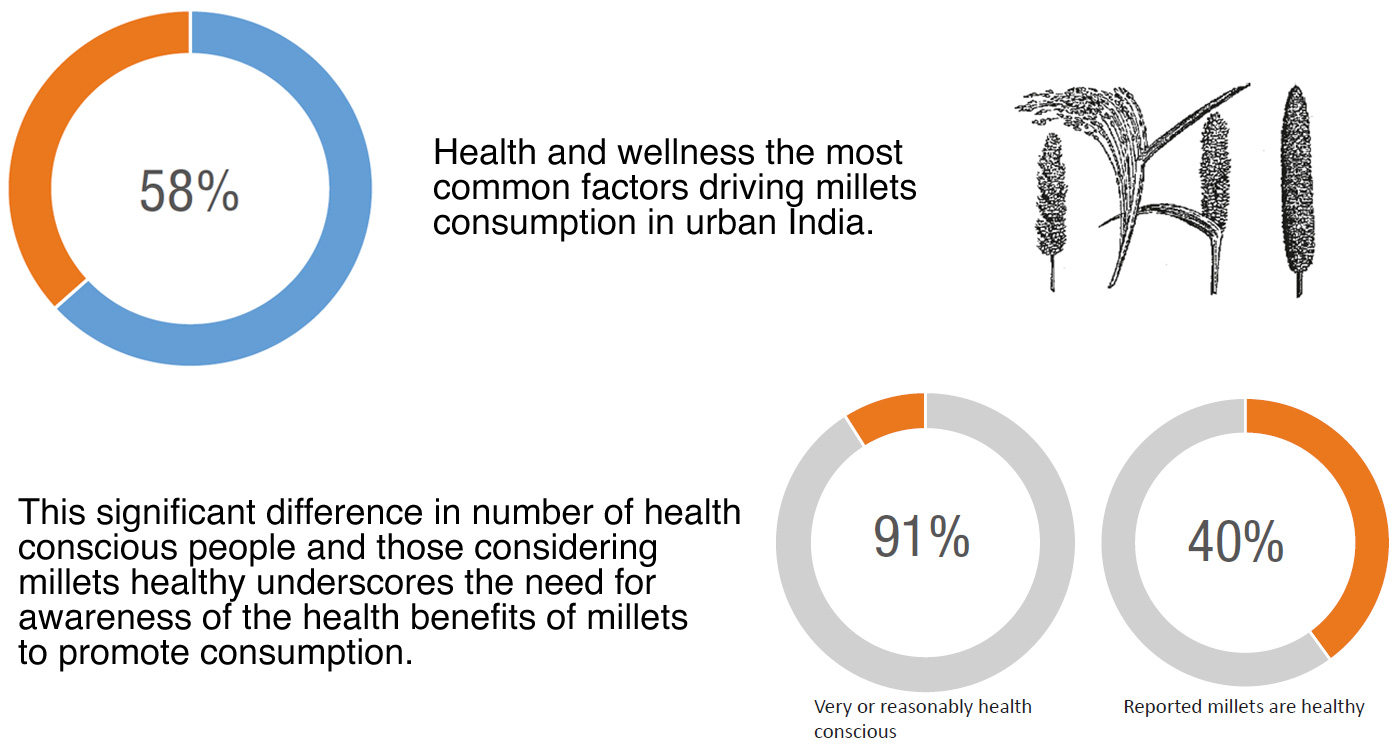