Two varieties of dual-purpose (food and fodder) pearl millet were shown to increase weight and overall growth in sheep, according to a study conducted in Niger. These two varieties could be considered as good quality fodder for crop-livestock systems in the country.

Earlier this year, Dr Clarisse Umutoni et al. conducted a study to assess the quality of crop residues of five new pearl millet varieties used as fodder for local young sheep. The study revealed that the different varieties of pearl millet differ in digestibility and nutrient composition which significantly affects the growth performance of the sheep. 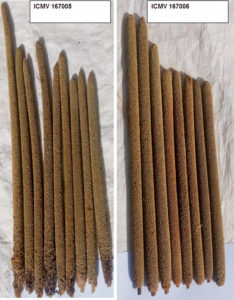 Digestibility of fodder is one of the key factors that have significant impact of livestock productivity and, in turn, on household economy. When animals feed on low-energy-value feeds (low digestible energy), their digestive systems slow down, resulting in reduced appetites. The combined effect of reduced appetite, lower feed intake and slower release of digestive energy leads to low weight gain and decreased milk production (see figure overleaf). 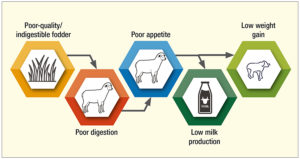 These two varieties were released for commercial cultivation in Niger for the Sahelo-Sudanian zone and are ready for commercialization in Economic Community of West African States (ECOWAS) countries.