A new groundnut variety, with 28% higher yields of oil and pods compared to zonal checks, has been released in Chhattisgarh state, India. This variety, Chhattisgarh Mungfali-1 (CGM-1), is the first ever groundnut variety released by Indira Gandhi Krishi Vishwavidyalaya (IGKV) in the new state which came into being in the year 2000.

In the national trials conducted in 2013 and 2014 under the All India Coordinated Groundnut Project on Groundnut (AICRP-G), it recorded an oil yield superiority of 28% over the best check GG 8, with an average oil content of 52% and a shelling outturn of 69%. It also recorded 27% higher pod yield over the zonal check in Zone 3 (which includes Chhattisgarh state). 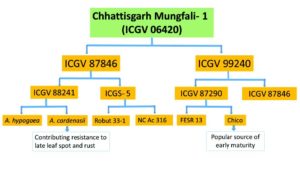 CGM-1 is resistant to leaf rust and moderately resistant to late leaf spot (LLS) – two important biotic factors affecting pod yield in rainy season cultivation in the state. Under national testing in AICRP-G trials, a disease score of 2 to 4 was recorded for leaf rust, whereas a disease score of 2 to 6 was recorded for LLS on a scale of 1 to 9. The variety is derived from a cross between two elite parents, one of which is ICGV 87846, which has an interspecific derivative as one of its parents, derived from a cross between cultivated Arachis hypogeaa and a wild diploid species Arachis cardinasii, the latter being the source of resistance to rust and LLS. The other parent, ICGV 99240 has a popular early-maturing variety, Chico, in the pedigree. The variety matures in 114 days in Chhattisgarh state during rainy season.

CGM-1 was released for cultivation in Chhattisgarh at the State Variety Release Committee (SVRC) meeting held on 12 June 2020. The variety was identified from extensive testing conducted during 2011-15 to identify stable high-oil-yielding groundnut lines under a project supported by National Mission on Oilseeds and Oil Palm (NMOOP) of the Department of Agriculture, Co-operation & Farmers’ Welfare (DoAC&FW) of the Government of India. This extensive study identified ICGVs 05155, 06049, 06041, 06420 and 03043 as stable high-oil-yielding lines (Janila et al., 2016). Subsequently, on-station and state-level multi-location trials were conducted under the project supported by The OPEC Fund for International Development, resulting in release of CGM-1 in 2020. The collaboration was ably supported by Dr SK Patil, Vice Chancellor, IGKV, Raipur who has been instrumental in testing and release of the variety.

In 2018, ICGV 03043 was released as GJG 32 for Zone 5 of India by Junagadh Agricultural University (JAU), Junagadh, Gujarat, which is gaining popularity.

For more on our work in groundnut, click here

Click here to see how ICRISAT can help in the COVID-19 environment in the short, medium and long term.