A motorized groundnut thresher is reducing drudgery for women farmers in rural Nigeria. Introduced in 2015, over 50 threshers have already been distributed to farmer groups and cooperatives. Recently at the National Agricultural Seeds Council (NASC) fair, Chief Audu Innocent Ogbeh, Federal Minister of Agriculture and Rural Development, Nigeria, was impressed by its demonstration and ordered four more units to benefit women in Cross River State.

Nigeria produces 7% and 29% of the world’s and Africa’s total groundnut production respectively. In West and Central Africa, groundnut is a key cash crop for smallholder farmers. While on-farm operations are primarily carried out by men, post-harvest operations are mostly done by women and children. Shelling groundnut (for seeds, grains or both) is not only an expensive operation, it eats into a substantial chunk of women’s valuable time. 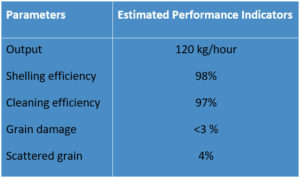 In 2015, working with the Agricultural Engineering Program of the Institute for Agricultural Research (IAR), ICRISAT, identified an appropriate motorized groundnut thresher that would cut down the time and effort needed to shell groundnuts. The performance parameters of the thresher are shown below:

Against this background, the NASC invited ICRISAT to the 2018 National Agricultural Seeds Fair at Abuja as a panelist in a conference ‘Enhancing Improved Seed Adoption towards Achieving Food Security and Wealth Creation’ and as an actor in the seed industry. ICRISAT’s stall displayed improved varieties of sorghum, millet and groundnut; processed products; dissemination materials; and the motorized groundnut thresher.

Impressed by the performance of the motorized groundnut thresher, Chief Ogbeh instructed Dr Philip Ojo, Director General of NASC to work together with ICRISAT to supply four threshers to underprivileged women and children of Cross River State. A video describing long hours of groundnut threshing by women and children from this region is frequently being aired on national television. ICRISAT offered the groundnut thresher to the Seed Processing Unit of NASC after the seed fair, which was held during 3-4 October 2018.

The ICRISAT delegation to the conference and seed fair was led by Dr Michael Boboh Vabi, Country Project Manager of the USAID-funded Groundnut Technology Upscaling Project.

For more on ICRISAT’s work in Nigeria, click here.

For more on ICRISAT’s work on groundnut, click here