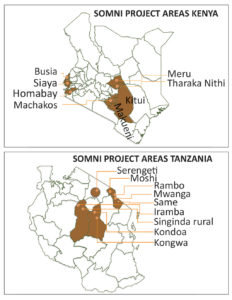 Increasing market demand for dryland crops in Kenya and Tanzania owing to IFAD-funded project interventions across the agriculture value chain for three years has led to last mile delivery plans of setting up efficient seed systems in the region. So far, over 14,268 project farmers in 369 farmer groups in the two countries received 10,963kg of seed. They produced 17,621 tons of all project crops (sorghum, pearl millet, finger millet, cowpea, green gram, groundnut and pigeonpea) valued at ~KES 42,745,918 (US$ 427,459). ­Memoranda of Understanding withMinistries of Agriculture in eight Counties in Kenya are underway and 15 farmer groups signed agreements with various off-takers to grow sorghum.

How a market pull was created

Extensive farmer participatory varietal trials in Kenya and Tanzania and the involvement of private companies in testing the commercial viability of sorghum, pearl millet and finger millet cultivarscontributed to creating a sustainable market pull for the crops resulting in increased farmer incomes. Key outcomes from the trials included the release of a high-yielding, resilient, market-preferred finger millet variety in Tanzania and the entry of eight each of finger millet and sorghum into National Performance Trials in both the countries (see box).

Trainings on productivity enhancementincluded seed selection, land preparation, soil management, seed rate, spacing and intercropping, weed, pest and disease management, thinning and gapping, harvesting and post-harvest handling. About 68 field days were organized and conducted across the two countries attracting 4,269 beneficiaries who participated in the selection of preferred varieties and hybrids of the project crops.

Partnership with government (County) departments facilitated value addition trainings for creating micro-enterprises targeting youth and women for both nutrition and improved incomes. Close to 1,435 beneficiaries were trained in partnership with County departments of agribusiness and home economics.

*Impactof the project in three years

Increased sorghum and millet cultivation ­– Delayed and unreliable rain distribution resulted in total crop failure in Homa Bay and Busia counties in western Kenya and in drying up of the crops in about 30% of the sites in eastern Kenya during the short rains of 2018 (October-December 2018). This made most farmers to include sorghum and millets in their next cropping season during the long rains of 2019 (March-May) which resulted in bumper harvests of sorghum, finger millet and pearl millet.

This was done in partnership with the ward agricultural extension officers.

Avenues identified for farmers included diversifying sorghum grain for the production of poultry and fish feed and training youth to earn incomes by operating threshers that cut down on farm drudgery. Women groups were trained to prepare different sorghum and millet foods to help boost household consumption and sell their products to rural outlets like schools, hospitals and during local market days. A local bakery that utilized the sorghum and millet produce partnered in the value-addition training programs.

The market for high quality, alternative poultry feeds is high in Kenya with 24 of the 47 counties prioritizing poultry value chains in their County Integrated Development Plans. A farmer group from Ogando village in Homa Bay County, involved in the project’s sorghum production, is working with the project team to develop and commercialize feed production using sorghum and other locally available raw materials. The project team is working on an agreement to assist the group commence the production and expand their products to include poultry and fish feed. Poultry feed formulations developed during IFAD funded grant initiatives in Makueni County between 2010 and 2016 will be used to support commercialization in Homa Bay. Testing and certification services will be done in tandem with the commercialization efforts. 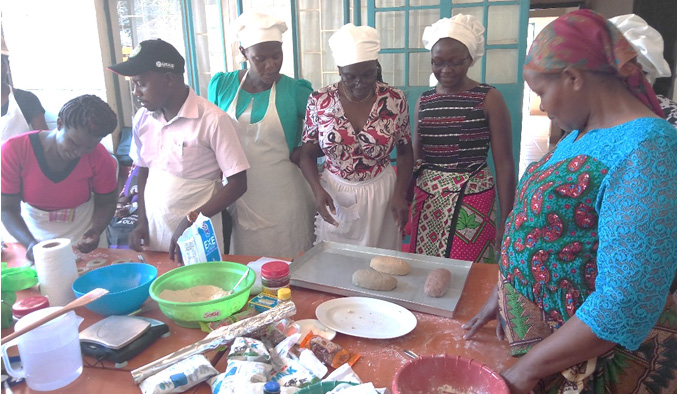 Training youth to earn incomes by operating threshers Eleven portable threshers were purchased and 48 youths were trained on operation, repair and maintenance of these threshers to offer threshing services to beneficiaries at a fee. Demonstrations were held for 618 beneficiaries during harvest and post-harvest handling training. The mechanization component and the quick income attracted youths in sorghum and millet farming while farmers engaged their services to reduce drudgery, save on time and cut their threshing cost by almost half. Manual threshing costs KES 8,889 (US$ 89) while machine threshing costs KES 4,444 (US$ 44).

Women’s groups trained on production of sorghum and millet foods

Trainings targeting 11 county officers in the home economics and agribusiness departments addressed issues of hygiene, packaging, product formulation, enterprise development and nutrition. The training was conducted in partnership with Amari Bakery Ltd, which uses sorghum and millets in its products and offer related training services. Follow-up trainings were conducted at the group level during the reporting period. The project plans to hold refresher trainings on hygiene, certification and nutrition issues in the coming months.

The project is in its final year of implementation and the future emphasis is on the development of sustainable seed systems to enhance access to the improved technologies developed and tested through the project and to adopt the aggregator model in Kibaigwa area of Dodoma, Tanzania to facilitate linkage between end-users and producers as well as input suppliers.

The above achievements and plans were discussed at a review and planning meeting held at the commencement of the fourth and final year of the project activities.

*Figures taken from a survey conducted by the project

For more on our work in Kenya and Tanzania visit

Project: Strengthening Sorghum and Millet Value Chains for Food, Nutritional and Income Security in Arid and Semi-Arid Lands of Kenya and the United Republic of Tanzania (SOMNI)