Sorghum and millet grow money for the Mariko family Access to fertilizer is a serious constraint in Sola Bougouda, Mali. Farmers looking for hardy and resilient crops that need less fertilizer than maize have shifted to sorghum and millet. The Mariko family made the shift and reaped big gains. In fact, Fousseyni Mariko, seed producer and President of the Djiguifa cooperative, is a pioneer in his community. In 2014 he enrolled in a Feed the Future farmer field school and was one of the pilot farmers trained on seed production, credit systems, storage techniques and marketing.

Fousseyni recalls that there were few seed producers within the community and the yield of old varieties was around 900 kg per hectare. In comparison, the popular new varieties Grinkan Yerewolo, Tiandougoukoura and Soubatimi have more than tripled yield with a potential of three tons per hectare and one ton of seed per hectare.

Producers, including a significant number of women involved in sorghum seed production and marketing, have improved their incomes. Many have built new houses, while others have bought motorcycles or work equipment like threshers and plows.

“Before this project, I was not a millet and sorghum producer. Now, I have five hectares devoted to sorghum. In 2018, I produced 700 kg seed of the Grinkan Yerewolo variety and grew pearl millet on two hectares, harvesting 2500 kg. After allocating grain for home consumption, I sold part of the produce for $ 655.   – Fousseyni Mariko, Farmer

The strength of cooperatives

From a single grain store for the community in 2017, the Djiguifa cooperative acquired two new warrantage stores to enhance capacity for improved varieties. Eventually with the support of American people, the cooperative also acquired a millet and sorghum thresher and fully equipped its warrantage store.

The Djiguifa cooperative has managed loans totaling $3,745 since the launch of the warrantage system in 2018. The warrantage system gave producers access to credit and participants were able to invest in new materials and capital assets to expand their production capacity, while others used profits to feed their families. “Farmers who could barely get credit of $ 44 before can now access as much as $ 266,” Mariko observes. 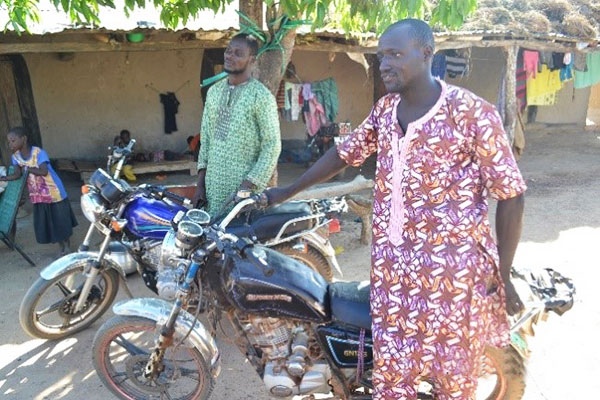 Cooperative members show their motorcycles purchased from incomes gained through sorghum production and commercialization via the warrantage system. Photo: A. Diama, ICRISAT

Gains for the Mariko family

Fousseyni says he stored a ton of cereal as a guarantee for $500 credit provided by the microfinance institute Soroyiriwaso. This loan helped him branch out into other profitable activities including a small ruminant fattening business. From the profits, he bought a motorcycle and constructed two grain lockers and two stores in an urban center near his village. “I also completed the construction of an urban residence for my mother to relocate her closer to the hospital where she is undergoing medical care,” explains Mariko.

Diala Sangaré, Fousseyni’s wife, is also a seed producer and a member of the cooperative. She bought two goats in 2018 for fattening. With the profit, she was able to meet the costs of plowing and maintained her own seed plot. “I deposited part of my harvest at the warrantage store for credit of $ 89 in 2019 to buy my daughter’s bridal trousseau,” explains Sangaré. 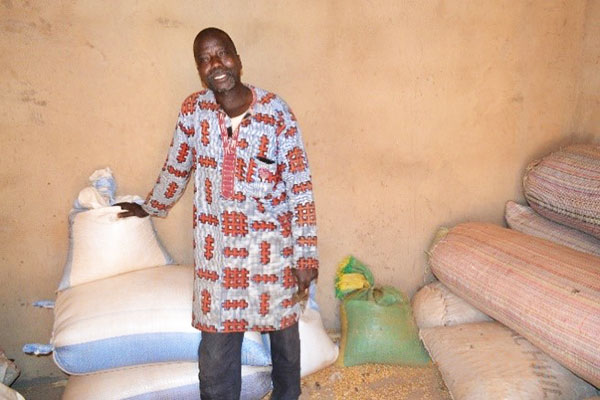 Fousseyni Mariko is his grain store. Photo: A. Diama, ICRISAT

Another producer and cooperative member from the family, Sidi Mariko, adds, “I availed a $ 177 by placing 1,500 kg of cereals in the warrantage store. I added the loan amount to my savings and bought cattle costing
$ 399 in 2018. I also took a second loan and built a new house.”

Summing up the project impact, Mariko says, “The production of improved sorghum and millet varieties, the better management and sale of produce and the success of the warrantage system has greatly contributed to mutual trust between farmers and the microfinance institutions leading to a win-win situation for both.”

Farmer field schools like these are supported by Feed the Future through the United States Agency for International Development (USAID) as part of Africa RISING’s Large-scale Diffusion of Technologies for Sorghum and Millet Systems (ARDT_SMS).

Read more about sorghum and millets on EXPLOREit