The stories of ‘sorghum’ Agatha and ‘seed’ Mary Why linking with the private sector is important for the AVISA project writes Jayashree Balasubramanian, Lead Communications, ICRISAT

Passion can be a very tasty ingredient. It is with a large dose of this passion that Ms Agatha, an unusual food processor in Tanzania, aims to create demand for a new series of products. She is among the few processors in the country working with sorghum – an ancient and nutritious cereal suitable for dryland agriculture in the region.

Most consumption of sorghum is by farm families at the household level, though the possibility of varied products is exciting. Ms Agatha is a businesswoman who recognizes the early adopter advantage with new sorghum products. As we walk through the three small rooms in the industrial area, where her processing and packaging unit is located, it is evident that it is quality and personal touch that are the advantages of her business.

“I roast the cereals myself,” says Ms Agatha, pointing to the large pans for the purpose. “Then my helpers and I use pouches, labels and the outer wrapping of the boxes to send to various outlets.” Given that processed sorghum has limited shelf-life, she takes a delivery-on-demand approach, keeping several boxes of wrapping ready to quickly pack and dispatch.

Known for tolerance to drought conditions, sorghum can be grown with minimal inputs and has the additional advantage of being a nutritious crop. Depending on variety and growing conditions, it has high protein (12.0mg/100g), iron (5.7mg/100g) and dietary fiber (8.3mg/100g). Despite its nutritive value, utilization and demand for sorghum is constrained by limited support and value chain development. This includes a narrow range of food and value-added products for household consumption and mass markets. A series of initiatives along the value chain, to boost sorghum cultivation, are showing results but need continued attention. These include providing quality seed of improved high-yielding varieties through private seed companies and Quality Declared Seed (QDS) system, besides farmer capacity building in good agronomic practices. Other initiatives have focused on generating demand among consumers with new recipes and chefs and nutrition-enhancing behavior promotion in rural communities. 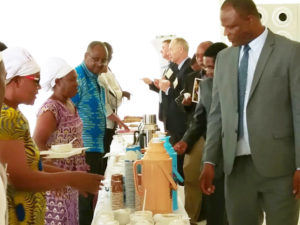 Already, Australian Department of Foreign Affairs and Trade and IFAD-funded Smart Food and SOMNI projects have placed major focus on driving consumer demand working with processors to develop modern convenience products. They partnered with influencers like Ms Agatha to make this change.

Now the AVISA project launched in February 2019, funded by the Gates Foundation, will complement ongoing and earlier efforts providing varieties with market traits.

Scaling up, however, is not going to be easy. Sorghum processing requires special machinery that is not available in Tanzania. Imports are difficult to manage and expensive for small scale units. “The government is very supportive and I have orders waiting. I can also get farmers to be more interested in sorghum and personally promote the crop making it easier to get raw materials. The only thing required, is capital to fund the machinery,” says Ms Agatha.

She participated in the launch meeting of the AVISA project attended by scientists, national agriculture research systems and private company representatives. The project aims to fill a gap in breeding and research for specific cereals and legumes through market-driven varieties for five crops including sorghum in seven African countries.

Says Dr Jeff Ehlers, Program Officer, The Bill & Melinda Gates Foundation “One of AVISA’s primary goals is to ensure greater connection with private sector – seed companies and processors – to build the value chain. It will address the entire range of requirements, including availability of technology.”

The need for new varieties and quality seed are being taken forward by scientists. “HOPE I and II and SOMNI project initiatives have seen a steady growth in acceptance and adoption of new sorghum varieties and use of quality seed in Tanzania. However, increased sorghum production will be determined by grain demand. Ms Agatha and other players on the demand side will define production trends and they need support,” says Dr Eric Manyasa, Senior Scientist, ICRISAT.

Addressing seed industry gaps is also important. At the helm of an eight-year-old seed company, Dr Mary Mgonja, like Ms Agatha, is an independent businesswoman. Sorghum is equally her passion. However, for her too, supportive efforts are crucial. AVISA will work closely with seed producers to provide researched and tested improved varieties to benefit farmers, emphasizes Dr Chris Ojiewo, Seed Systems Theme Leader, ICRISAT.

“Private sector is small in Tanzania. We also need to see how we market it to the farmers,” says Dr Mgonja. Her company is among the very few private seed companies dealing with sorghum so she believes financial support is needed. “I am convinced. I am on board, but we also need to make a noise about sorghum, to generate demand,” the former scientist-turned businesswoman says.

While some projects offer promotions for seed multiplication, AVISA aims to be a sustainable model, generating demand for improved seeds from the companies. “It includes several years of research and work being handed out to seed companies,” says Dr Jan Debaene, Global Head, Breeding, ICRISAT. “This material is really worth a tremendous investment, reducing the time these varieties require to be available to the public”.

As for ‘making a noise’, initiatives such as the ‘Smart Food’ led by an African and Asian consortium (ICRISAT, FARA, CORAF, FANRPAN and APAARI), are already working with sorghum to create market demand. Reality TV cooking shows and improved recipes, besides roping in private players, have given sorghum greater visibility and a brand connect in the region.

To scale up, AVISA will aggressively address production and promotion of improved sorghum varieties to make it viable for farmers. It will also look for a way to bridge gaps, drive improved yields and better incomes through enhanced seeds and build the value chain – all towards the goal of a healthier and more prosperous Africa. Early adopters and enthusiasts such as Ms Agatha and Mary are ambassadors for sorghum. To build on that momentum, many movements are required. This is why AVISA has built in participation of the National Agricultural Research System across countries, for scale and sustainability.

As more than 200 participants pored over plans at the launch meeting, a hailstorm raged, nearly drowning out the speakers’ voices. People in the room just spoke louder to be heard. Everyone there knows this initiative is going to take a lot of effort. A hailstorm is of no great consequence. Work continues and has to continue uninterrupted.