Training ‘nutriprenuers’ to start up in Mali To help aspiring entrepreneurs in Mali kick-start their food ventures, a five-day Smart Food workshop was recently conducted in the country’s Diola region. Women and men were trained in all aspects of producing value-added foods from sorghum, millet, groundnut and cowpea for improving household nutrition as well as for sale. The workshop was organized under the aegis of EU-APSAN-Mali project.

The workshop began with training in good hygiene practices for households and processing units as well as assessing the quality of raw material used in processing. The second module focused on processing techniques for nutritious food products. The end products of this module were 10 recipes, including complementary flours, enriched porridge, vegetable soup and enriched bread. The third module imparted training in packaging and labeling of products.

Up on return to their villages, the workshop participants are expected to organize similar training sessions for at least 25 members of their communities in each of the 16 villages represented.

Nah Dembele of Wacoro village who is one of the members of a women food processing group, said, “We produce crops, but we did not know much about the potential of our crops, especially in terms of nutrition. With this training, we can benefit more from our production through its processing for family consumption and markets.”

“I now know how to prepare foods like enriched porridge, enriched cowpea soup and many other recipes learned during the training session,’’ says Mrs. Fatoumata Diarra from Siby village in the region. 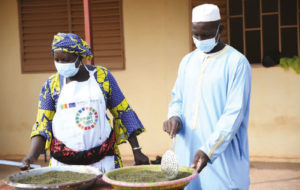 It was planned that the technologies demonstrated during the training sessions would be widely disseminated in the communities of the participants through radio programs and sharing of sessions’ videos through WhatsApp.

According to Ms. Agathe Diama, Smart Food Campaign Coordinator, ‘’Radio programs are produced and broadcasted to promote Smart Foods with key messages around the benefit of consuming improved fortified varieties and high-yielding hybrids of millet and sorghum rich in iron (Fe) and zinc (Zn), as well as improved varieties of nutritious groundnut and cowpea.”

The workshop, she says, helped participants master the techniques of training to train members of their communities in new or improved recipes made of their own locally produced crops which are known to be highly nutritious.

“Through this Smart Food training session, we have trained 32 women and 16 men who in turn will undertake similar trainings in sixteen villages of the UE-APSAN-Mali intervention zones,” said Dr Fatimata Cissé Diallo, Lead of the training, Food Technologist and Head of IER Food Technology Laboratory.

The Enhancing Crop Productivity and Climate Resilience  for Food and Nutrition Security in Mali (EU-APSAN-Mali) is a targeted project in key production systems, based on sorghum, millet, groundnut and cowpea which have the potential to meet a confirmed domestic demand and generate a greater impact on nutrition and food security. The project is based on the use of improved crop production technologies developed by ICRISAT and IER. These include improved biofortified varieties and hybrids of sorghum and millet that are high-yielding and rich in iron (Fe) and zinc (Zn) as well as groundnut and cowpea varieties rich in protein.