ICRISAT scientist, Dr A Ashok Kumar, in his presentation gave an overview of ICRISAT’s research on sorghum innovations suited to 1G and 2G biofuels and for biogas production. He said that there were options to choose from for biomass requirement in addition to gains from nutritious fodder and grain. He highlighted the fact that sorghum is ratoonable and is a highly water-efficient crop. He said that a package of agronomic practices developed by ICRISAT foster the best crop growth and offer protection against insects and diseases.

For 1G biofuels, sweet sorghum lines (ICSV 25308 and RVICH 28) with high brix (sugar content) of 16% at par with sugarcane were developed. These cultivars did not compromise on grain yield and the residue made for nutritious fodder (Nalini et al., 2013; Ashok Kumar et al., 2010). Experiments conducted in sugar mills proved the compatibility of the machinery for extracting ethanol from sorghum. However, sorghum stalks have to be crushed within 24 hours of harvest due to the higher rate of moisture loss compared to sugarcane. He said that the efficacy of techniques for retaining the sugars in stalks is under study.

For 2G biofuels, 4-5-meter tall multi-cut high-biomass varieties were developed. These varieties are highly suitable to providing biofuel feedstock (dry biomass of 15-20 tons/ha) and nutritious fodder. The brown-midrib varieties (introgression lines carrying bmr genes) with low (15%) lignin are easily digestible by cattle and provide greater nutrition than other varieties (23% lignin) for the same amount of fodder.

Currently, 3G biofuels, biogas and biomethane production techniques are under study. Preliminary studies show that anerobic digestion is much cheaper than bioethanol production and the biogas production potential of sorghum hybrid (ICSSH 28) is 80% higher than the corresponding weight of rice straw. 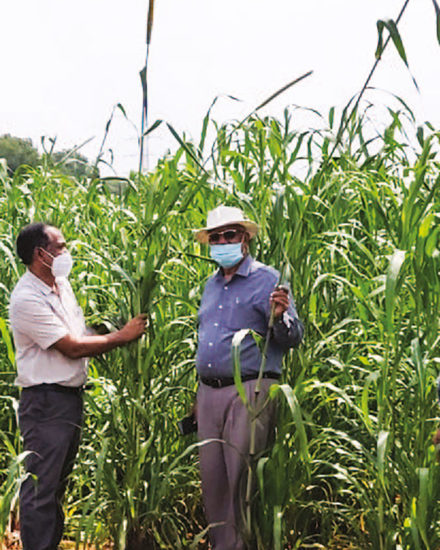 ICRISAT scientist Dr SK Gupta presented on the high-biomass pearl millet varieties with a capacity of 40-45 tons/hectare of green biomass per season. He emphasized on the hardiness of the crop and its ability to tolerate drought and soil surface temperatures of >62°C; it is adapted to low fertilized and degraded soils and tolerant to low temperatures (can flower at 10°C), acid soils and salinity. Mr Divakar Rao, Member, Karnataka State Biofuel Development Board, commended the development of salinity-tolerant varieties and said that pearl millet was ideal for making wastelands productive. During the field visit, Dr Gupta briefed the team on the lines they could choose from and spoke of the Hybrid Parents Research Consortium for both pearl millet and sorghum that facilitated selection of plant material by the private sector. He also emphasized on the dual-purpose aspect of pearl millet for nutritious fodder and biofortified grain.

Mr YB Ramakrishna, Member, Working Group on biofuels at the Ministry of Petroleum and Natural Gas, Government of India, mentioned of the Government’s advanced target of reaching 20% biofuel blending by 2025 and said that plans are in place for initiating E100 (pure ethanol fuel) sale from 2023 onwards. He said that development efforts are focused on sustainable aviation fuel and development of 3G fuels. By 2025, India will be the largest producer of ethanol in the world, he said.

The group began its tour with a visit to the SAT Venture to get an overview of ICRISAT’s multi-faceted work and was welcomed by Dr Arvind Kumar, Deputy Director General-Research, ICRISAT. Following discussions, the visitors visited ICRISAT’s sorghum and pearl millet demo fields, genebank, genomics laboratory and the Agribusiness and Innovation Platform premises.